Mattermost supports plugins to customize and extend the platform. See our demo plugin that illustrates the potential for a Mattermost plugin. To start writing your own plugin, consult our starter template.

Consider using a plugin in the following scenarios:

Plugins are fully supported in both Team Edition and Enterprise Edition.

The Plugin Marketplace is a collection of plugins that can greatly increase the value and capabilities of your Mattermost deployment. End users can see increased productivity through quick access to systems such as Jira, Zoom, Webex, and GitHub. Mattermost Admins can discover new plugins and quickly deploy them to their servers, including High Availability clusters. 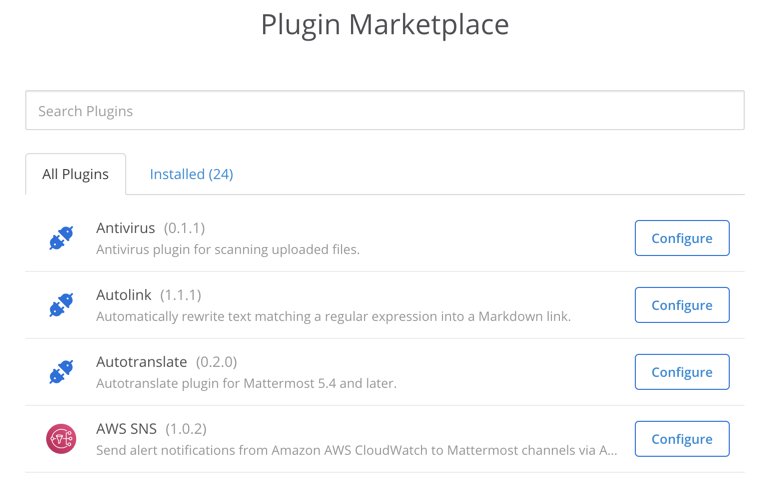 Plugins in the Plugin Marketplace are labeled to make it easier for administrators to choose plugins that fit their company’s security and risk policies if they do not allow for community plugins to be used.

Plugins identified as “Community” are produced by the open-source community or partners and the features/roadmap are not controlled directly by Mattermost. Prior to being listed on the Plugin Marketplace, they are reviewed by the Mattermost development team and code-signed to ensure the code Mattermost reviewed, is delivered. Mattermost does not directly support these plugins in production environments.

Plugins may be labeled as “Beta” if they’re released to the Plugin Marketplace early for customer previews. We do not recommend running Beta plugins on production servers.

When a new plugin becomes available on the Plugin Marketplace, it’s listed with an option to Install. Select Install to download and install the latest plugin binary from its respective GitHub repository. If there’s a cluster present, the plugin will be distributed to each server automatically.

Configuring and enabling a plugin¶

Once a plugin is installed (or pre-installed if shipped with Mattermost binary release):

Upgrade a plugin on demand when a new version becomes available. New versions of plugins that you have already installed will display a link to easily install the upgraded plugins. Some plugin versions may have breaking changes; please check the release notes if you are performing a major version change.

Upgrading plugins (prior to v5.18)¶

In v5.16 and v5.17 the Plugin Marketplace only supports the installation of new plugins. To upgrade a plugin, you need to manually update it by downloading the binary file from the GitHub repository and then upload it in System Console > Plugin Management.

There are two settings in System Console > Plugin Management:

The Plugin Marketplace server code is available as an open source project and can be used to set up your own private Marketplace if desired.

The Mattermost Plugin Marketplace is a service run by Mattermost that contains listings of plugins that we have reviewed and, in many cases, built. In the future, we plan to include community-developed plugins that will be labeled separately to Mattermost-developed plugins. as well as settings that would restrict which types of plugins you can install. Comments in our forum are welcome as we develop this feature further.

There are many ways to integrate Mattermost aside from plugins, and we have created a directory of integration “recipes”, some of which are scripts, plugins, or instructions on how to connect Mattermost with your Enterprise systems. Many are sourced from our community of customers. You can browse the directory at https://integrations.mattermost.com/.

Plugins may have one or both of the following parts:

Plugins are intentionally powerful and not artificially sandboxed in any way and effectively become part of the Mattermost server. Server plugins can execute arbitrary code alongside your server and webapp plugins can deploy arbitrary code in client browsers.

While this power enables deep customization and integration, it can be abused in the wrong hands. Plugins have full access to your server configuration and thus also to your Mattermost database. Plugins can read any message in any channel, or perform any action on behalf of any user in the Web App.

You should only install custom plugins from sources you trust to avoid compromising the security of your installation.

Note that the Marketplace plugins will still be verified even if the flag is off.

Public and private key pairs are needed to sign and verify plugins. The private key is used for signing and should be kept in a secure location. The public key is used for verification and can be distributed freely. To generate a key pair, run the following command:

Find the ID of your private key first. The ID is a hexadecimal number.

This is your private key and should be kept secret. Your hexadecimal key ID will, of course, be different.

Find the ID of your public key first. The ID is a hexadecimal number.

If you already have a public and private key pair, you can import them to the GPG.

For plugin signing, you have to know the hexadecimal ID of the private key. Let’s assume you want to sign com.mattermost.demo-plugin-0.1.0.tar.gz file, run:

This command will generate com.mattermost.demo-plugin-0.1.0.tar.gz.sig, which is the signature of your plugin.

Multiple public keys can be added to the Mattermost server:

To list the names of all public keys installed on your Mattermost server, use:

To delete public key(s) from your Mattermost server, use:

To manage plugins, go to System Console > Plugins > Plugin Management. From here, you can:

In versions prior to 5.16, go to System Console > Plugins (Beta) > Configuration.

Mattermost ships with a number of pre-packaged plugins written and maintained by Mattermost. Instead of building these features directly into the product, you can selectively enable the functionality your installation requires. Install pre-packaged plugins from the Plugin Marketplace, even if your system cannot directly connect to the internet.

Installing a custom plugin introduces some risk. As a result, plugin uploads are disabled by default and cannot be enabled via the System Console or REST API.

To enable plugin uploads, manually set PluginSettings > EnableUploads to true in your config.json file and restart your server. You can disable plugin uploads at any time without affecting previously uploaded plugins.

With plugin uploads enabled, navigate to System Console > Plugins > Management and upload a plugin bundle. Plugin bundles are *.tar.gz files containing the server executables and web app resources for the plugin. You can also specify a URL to install a plugin bundle from a remote source.

When RequirePluginSignature is true, plugin uploads cannot be enabled, and may only be installed via the Plugin Marketplace (which verifies Plugin Code Signatures).

Custom plugins may also be installed via the command line interface.

While no longer recommended, plugins may also be installed manually by unpacking the plugin bundle inside the plugins directory of a Mattermost installation.

Join our community server discussion in the Toolkit channel.

Plugin uploads fail even though uploads are enabled¶

If plugin uploads fail and you see permission denied errors in System Console > Logs such as:

It may also be that the working directory for the service running Mattermost is not correct. On Ubuntu you might see:

This can be fixed on Ubuntu 16.04 and RHEL by opening the service configuration file and setting WorkingDirectory to the path to Mattermost (generally it’s /opt/mattermost).

A similar problem can occur on Windows:

If you’re seeing x509: certificate signed by unknown authority in your server logs, it usually means that the CA for a self-signed certificate for a server your plugin is trying to access has not been added to your local trust store of the machine the Mattermost server is running on.

You can add one in Linux following instructions in this StackExchange article, or set up a load balancer like NGINX per production install guide to resolve the issue.